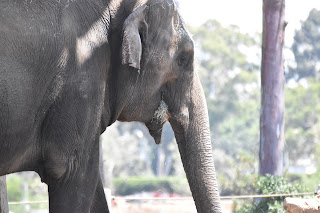 This multi-ton beast is the largest land animal on Earth. The largest weighed 24,000 pounds, the heart alone weighed about 27 to 46 pounds. The heart of an elephant beats at only 27 beats per minute while the Canary's beats at 1000. The elephant weighs so much that it can't jump. At birth, the elephant weighs 230 pounds. An elephants trunk has more than 40,000 muscles in it. While an elephant doesn't look like a cat but it purrs like it. The large ears of an elephant are to regulate the blood flow, if it is hot the ears cool them down.
Posted by Travis at 8/26/2017 No comments: