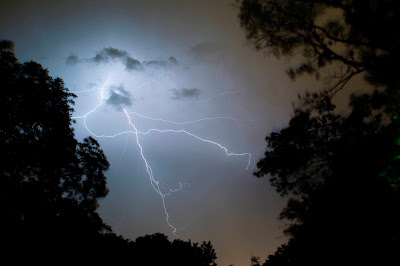 After returning from Colorado, I was sitting at my desk, looking out the window, and I saw this storm rolling in. The storm didn't contain much rain, but it did feature a lot of lightning. I was trying to focus on my homework, probably some math, but kept getting distracted by the lightning. I took my camera and set it up on the tripod. I pushed the lens as close to the glass as I could, to try to minimize the glare, and started taking pictures. The last time I tried taking pictures of lightning, I pressed the trigger or shot a video and hoped to capture it. This time was different. I used the long-exposure technique to keep the shutter open for multiple seconds. This would mean that the lightning could strike anytime between those seconds, and I would capture it. After taking a few blank pictures, I finally got what I wanted. A crisp picture of the lightning lighting up the sky, surrounded by clouds and trees.