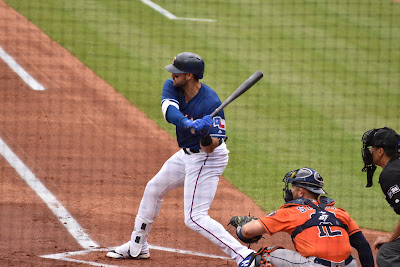 During the Ranger's first at bat, they were able to score one run off of Joey Gallo's hit. I took multiple pictures (around ten) during this single pitch. I set my camera to take pictures with a shutter speed at 1/4000. This is the highest it can go and I set it to the most amount of pictures it could take in a single push of a button. During the entire time, the ball was out of the pitcher's hand, I took four pictures. The ball was moving so fast that none of those four pictures had the ball in it. This picture happened under a second before the home run.
Posted by Travis at 5/04/2018 No comments: