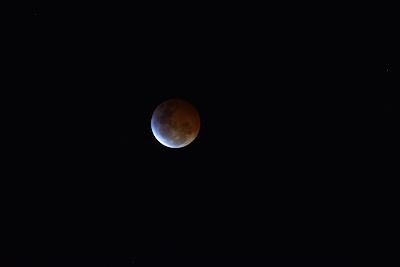 The night of January 20th into the early morning of January 21st there was a lunar eclipse. It began at around 9:30pm and continued into the early morning hours but I went to sleep at 12:30am, just as the white started to return to the moon. I took this picture at 11:48 pm, as the sun merely started to cast its light back on the moon. I believe it is my best but I still have many others from the first time the moon was blocked from sunlight by the Earth to the sun returning to the moon.
Posted by Travis at 1/22/2019 No comments: