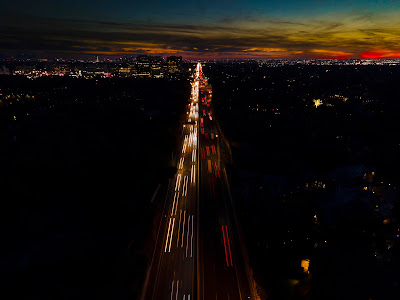 After adjusting the camera angle from the last image, I was delighted by this sight. I kept the same settings (0.8sec, f2.8, 100 ISO) which allowed for the motion of the cars to show. The sunset portion of the image is a second image that I took minutes before this one. If you don't know, the Dallas North Tollway runs almost directly north-south, and the sun doesn't set in either of those directions. So, about twenty minutes after sunset, I took an image of the colors above the already set sun. Then moments later, I took one of the moving cars. I combined the two, and it turned out like this.