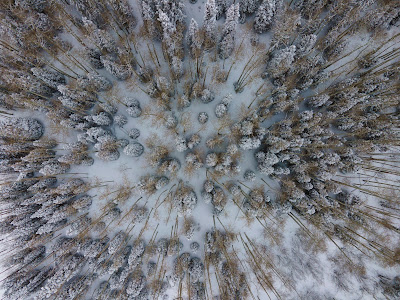 After waiting as long as I could, I sent up the drone. The temperature was around 15F, but I wasn't too concerned about the battery or the drone's performance since it was warmed before take-off. While in the air, I looked around, then looked down, and saw these snow-covered pine trees. I wanted to position the drone such that the entire frame was full of trees, which wasn't very hard to do. Then, when editing, I debated putting the picture into black and white. I eventually settled with color because I like the hints of brown and blue that add another layer to the image.