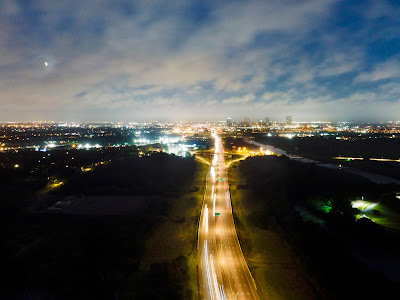 I bet you weren't expecting this post today, but how could I miss such a fascinating event! The day started with a 4:30 alarm, followed by a thirty-minute drive, followed by an introduction to my new favorite park. I had known about the May 26th lunar eclipse for quite a while but couldn't find a place near home but also far from city lights. I settled on Tandy Hills Park, off Interstate 30. The viewing of the eclipse was sporadic, as the clouds decided to invade my photographing of it. How rude! But, there were a few seconds when the clouds broke and provided me with a glimpse of the event. A lunar eclipse occurs when the Earth blocks the sun's light before it reaches the moon. The timing of this picture is before the total eclipse, which is why the moon looks like a regular crescent. Regardless of the clouds and regular-looking moon, the view from the drone was superb. It is odd for me to post twice a day, but I could not wait to post this taste of the lunar eclipse (the whole eclipse series is coming after the winter drone series). 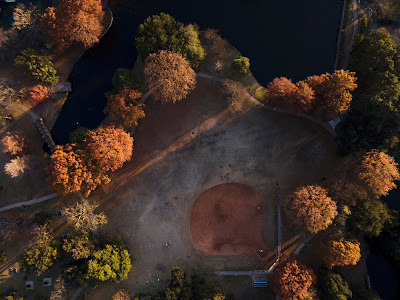 As I continued my bike ride south, I noticed this baseball diamond. I have taken a few pictures near the area, but never from a drone. I took this picture a few minutes before 5, which made the shadows long and light soft. Throughout the image, the subjects are cast in different lights. Treetops in a bright orange or green, the baseball diamond and park a soft yellow, the lake a dark black, and the pathways a light gray. It is a unique way to see the park, one that I have never seen before.