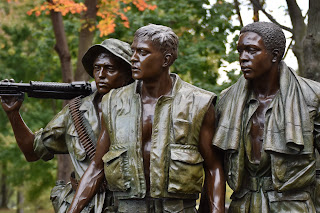 This is a two-part picture. Today's picture is of these three soldiers who fought during the war and tomorrow's picture is about the wall of names featuring all of the people who died. Around 56,000 people died this war. One of the chemicals used, named Agent Orange, recently killed another person. It is a toxic chemical that was sprayed to stop the advancing troops and kill them. The only problem is that is killed on both sides of the war.
Posted by Travis at 11/17/2017 No comments: