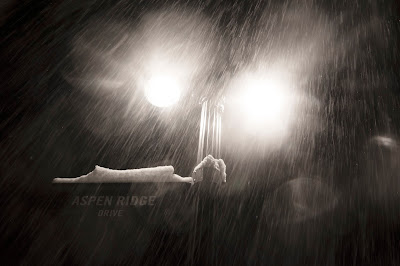 After waking up a little too early the next day, I decided to take a stroll in the shin-deep powder. Even after sixteen inches fell, it was still snowing. After walking for a little while, I found this lamppost and street sign. I set up my camera and tripod and took a long-exposure picture of the snow falling. Even in the short two-ish minutes that it took to take this picture, I still managed to accumulate a large amount of snow on the lens. You can see this with the circles of light and fuzziness of the lights. But I think it adds to the picture. Nothing says snowstorm more than not being able to see fully.