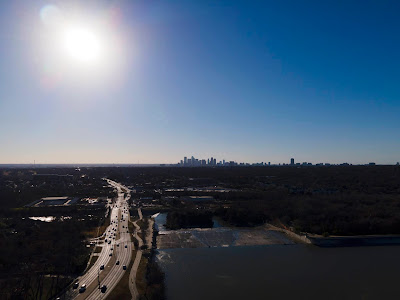 My next adventure led me to White Rock Lake, where I was greeted with blue skies and gusty winds. These winds wouldn't have been much of a problem, but I had recently updated the drone and was not accustomed to the new direction-awareness system. This system tells you where the drone is relative to the controller and which direction it is facing. Regardless, I decided to test it out and flew anyways. The next problem was trying to shoot west towards downtown, right where the sun was. I thought about lowering the camera angle and avoiding the sun altogether, but that didn't help. So I figured, might as well include the sun instead of trying to avoid it.