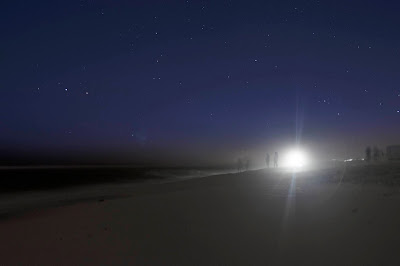 Wow! Did I post on a Saturday again? Yes, I did! When I originally scheduled the posts in mid-January, I was still working on this image. After a little while of editing, I wanted to post it before the next series, but I also wanted to start that series on a Monday. So, I posted on a Saturday, lucky you! This picture is a combination of two images; one of the people walking on the beach at night and the other of stars. I took both pictures within thirty minutes of each other, but the settings were wildly different. For the people portion of the image, I used a shutter speed of ten seconds and an ISO of 640. For the star portion of the image, I used a shutter speed of twenty seconds and an ISO of 100. Both parts had an aperture of 2.8. Basically, these two portions would not form this picture on their own, and some editing needed to be done. After multiple attempts to merge the images, I ended up using the sky replacement tool in Photoshop and created this.