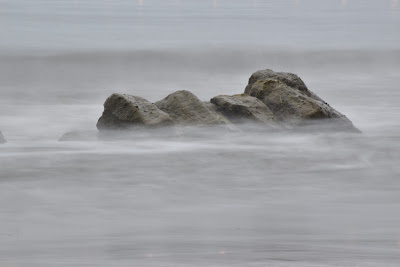 I liked the pier with the lights, but I felt the picture needed something more. I walked to my right on the beach (North) until I found a rock in the water. Using the same remote exposure, low shutter speed, and high aperture I focused on the rock and had the waves crash around it. By the time I took this picture, the sun had just risen. This made taking long exposure pictures harder but not impossible. I wish a wave crashed over the rock so I could capture it, but I do like the movement of the waves around the rock.
Posted by Travis at 7/15/2019 No comments: