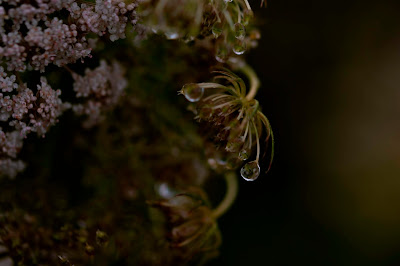 I found these flowers right below the scene of the last picture. Some of the buds had bloomed into white and pink flowers, while some others had died. On these dead flowers, the rain formed little water droplets. Then, using my macro lens, I focussed on the single water droplet that was just barely hanging onto the flower. I was trying to capture the miniature reflecting world formed inside the droplet, but it was just too small for my camera to capture it.
Posted by Travis at 6/06/2020 No comments: