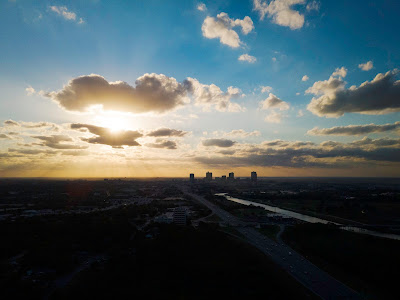 Backing up a few hours from Tuesday's post, I had sent the drone into the air to capture the sunset. There was a steady breeze of about twenty miles per hour with gusts reaching thirty-five plus. The limit for my drone is sustained winds of twenty-three miles per hour, which was just barely high enough to tackle that night's storm. I tried taking a timelapse from the drone but kept receiving high wind warnings requesting that I land it. I ignored those requests, everything turned out alright, except that my time-lapse was quite shaky. Regardless, I was able to take a still out of the video, resulting in this image. I chose it because the sun is partially hidden behind a cloud, reducing the effect of a blown highlight. This, paired with the magical colors of the sunset and Fort Worth skyline, makes for a fabulous image. 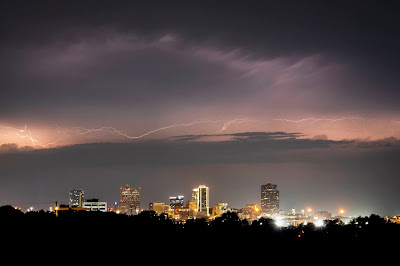 After spending way too long away from my camera, I decided one afternoon to take sunset pictures. You might recognize this spot from when I took images of the lunar eclipse it's, Tandy Hills Natural Area in Fort Worth, Texas. I had heard of a storm rolling in and couldn't think of any spots in Dallas to take lightning pictures, so I made the short drive. When I arrived, I wasn't alone. Three separate wedding photographers had already claimed their spots. I staked out my spot and set up my cameras. I had the GoPro and drone doing a timelapse and my Nikon doing a mix between timelapse and hand-held image taking. This image comes from a timelapse which I took individual images out of. There is no way for me to snap the shutter in time to catch lightning, so I had the camera automatically take pictures then I chose the best ones.