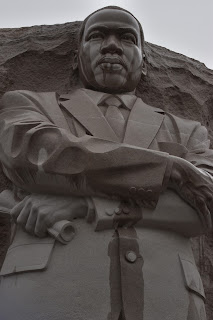 Throughout Martin Luther King Jr.'s life, he wanted equality for all. He was called names, beaten, and almost killed several times all for trying to give African Americans voting rights. In Washington D.C. is this statue of him in a nonspeaking and restful pose. It was raining that day, causing me to figure out a way to take pictures but keep my camera dry. I ended up putting a plastic bag and handtowels over my camera and hoped no water would seek throguh that, which none did.