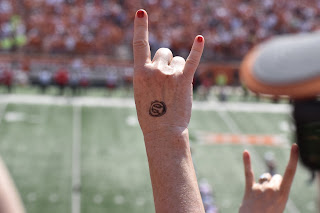 At the beginning of what was supposed to be an 85 degree Texas football game, the heat had already made me sweat an insane amount. It was probably close to 100 degrees. I stayed the whole game and had several glasses of water. It was not the best game but I took a few good pictures, like this one. The girl in front of me put her horns up at the beginning of the game. Then I took this picture thinking it would be bad, but I actually like it quite a lot.
Posted by Travis at 9/26/2017 No comments: