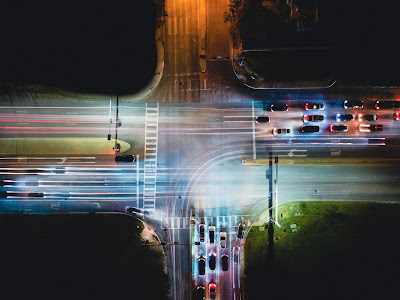 After spending a drone battery flying above Interstate 75 (around thirty minutes), I drove on over to another intersection I knew would be very busy. The image you see is a combination of two images. Both were long exposures, but I wanted to emphasize the car lights more, so I merged the two. I have also been experimenting with different presets in Adobe Lightroom. A preset is an already constructed edit that you throw onto an image to quickly and easily edit it. For this image, I used Future 04. Essentially what it did was increase the contrast, vibrance, and saturation of all colors. This was my first image with the preset, but I think it will become much more commonly used.